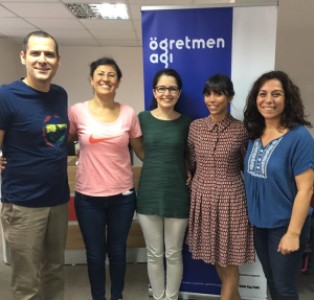 What was the Problem?

Children face stereotypes and gender stereotypes in their families, learning environments and various social areas, and they start to act biased by adopting these judgments. Behavioral change in children begins with different examples and positive experiences. So, how can we create positive experiences that will prevent students from developing prejudices about gender?

In the problem-solving process where design-oriented thinking methodology was applied; it was observed that children did not believe that they could change gender patterns and felt powerless to create change. It was concluded that lack of role model is one of the important reasons for this belief. The "Step by Step Prejudice" activity was developed to create positive experiences that would raise awareness in children and prevent children from developing prejudices.

Before the activity, the teacher tells the students the definitions of gender and prejudice and asks what these two concepts mean to them. The teacher also heralds an activity related to gender and prejudices. He/she wants the students to write about the prejudices that they encounter, hear or experience in their daily lives on the classroom board. The students discuss the prejudices written. They talk about the social, economic and political equality between the sexes and the social importance of equality. The students are asked to write examples of equality instead of prejudices.

While this activity is in progress, to reinforce the gender issue, the students are delivered cards containing prejudiced statements (Women cannot be construction engineers; Men cannot knit, etc.) and cards containing egalitarian statements (Being a construction engineer has nothing to do with sex, etc.). Only egalitarian statements are read by the moderator. The students whose cards are read by the moderator step forward while the others wait. Why the student comes forward in every step or the classroom discusses why the student stepped forward.

As a final step, more than one activity can be performed to create positive experiences. These activities may vary according to age group.For example, a female pilot, a female soldier, a female surgeon or a male nurse, a male dancer etc. can be invited into the classroom to prevent students from developing occupational prejudices. In addition, male teachers can be asked to knit and show how to knit to the students in the school garden. Also, female teachers can be asked to repair something or paint the walls in the classroom.

An increase in students' awareness of gender prejudice was observed. It was also observed that they were more sensitive to prejudiced and unequal discourses.